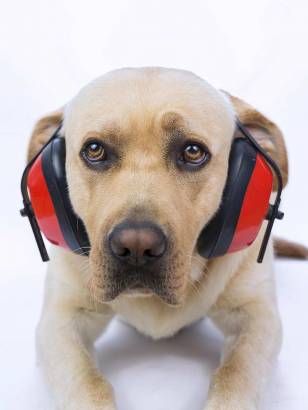 For many dogs fireworks are a nightmare…I know I see it frequently in my work as a dog behaviourist and trainer. Maybe if it were one night you could accept it, but no, it seems to go on for weeks; creating misery for the dogs and owners alike.

There have been campaign efforts in the past to reduce the volume of fireworks, but this seems to be slow to take effect. There also seem to be more and more shops opening specifically to sell fireworks at peak season, with little or no control on how much people can buy, or where they are let off. So this brings our attention to the plight many dogs endure each year (for prolonged periods in some circumstances), especially for dogs living in more built-up areas. This is the issue of fireworks being let off in an indiscriminate way.

One common trait that I find after discussing the matter in detail with the owner, is that they seem to be giving the ‘wrong kind’ of attention to the dog during its stressful period; inadvertently reinforcing the dog’s behaviour. This is not particularly a fault of the owner as they are doing what humans do in such circumstances. If this were human-to-human interaction, the reassurance would be understood for what it is, and some solace and reassurance would be taken by it.

We are of course not born to understand canine language without reading books or studying their ways; hence this poignant communication gap between dogs and their owners often arises. As we are not able to discuss the matter with the dog, we will need to find other ways of showing that we ourselves are calm and in control of the situation, offering reassurance to the dog in the process.

An analogy is to imagine you were at cruising altitude in a plane as you make your way to your holiday destination. The plane experiences some serious turbulence, and naturally, you anxiously look to the flight attendant for any signs of concern. Of course, they always look calm and continue with their work with a fixed smile. So you say to yourself that if they’re not concerned neither am I. Then imagine how you would feel if the attendants start to run up and down the aisle like headless chickens screaming that we’re all doomed! I know which approach makes me feel calmer and more reassured…and so the same goes for our dogs in these circumstances.

The simple point I make to owners in this situation is that whatever state of mind the dog is in at any point (whether stressed or calm) when you touch, talk to, or interact with the dog you are likely to see more of this behaviour in the future as you are reinforcing the behaviour at that time.

I once consulted with a lady whose dog suffered from firework-related anxiety. It also has a wide range of behavioural issues that were in most circumstances further reinforced by the owner. Much of this I realise is inadvertent on the owner’s part, but none the less misguided. The reason I bring this up is that I also find a number of other (apparently unrelated) issues that are best dealt with at the same time as the foremost concern for the owner…in this instance fireworks. This ladies dog (a Bichon Frise – small dogs are often treated differently by their owners) also has issues with lead pulling and nervous aggression towards other dogs. She has also taken to feeding the dog by hand as it will leave its food from time to time.

So I often find myself going full circle, and coming back to the simple yet effective aspect in all human-dog relationships, and that is one of showing what I call ‘Positive Leadership’ to the dog. This is another subject in itself, and I would like to return to this subject in the future. There are things you can do however both on the day and ideally in advance: