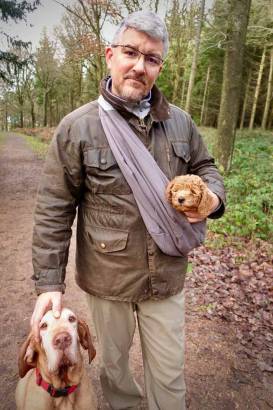 This video looks at how we as a family took Ruby out in a puppy sling from the first full day of us owning her. The sling allows us to keep a hold on her whilst she effectively does the same walking circuit as our two older and existing dogs Max and Pip. You can see the sling directly on Amazon here.

Socialising your puppy. Prevention is always better than cure

In my day to day work helping people with dog behaviour problems, I am frequently seeing behaviours that I believe could have been avoided or greatly reduced by a more thorough and complete socialisation practice. In light of this, I wanted to pay some time and attention on setting out that this is perfectly achievable provided you get your pup at the right age (8 weeks - I shall repeat that number a lot in this article!) and that you then simply get out and about taking into consideration the points I raise in this article in an effort to save you the new puppy owner unnecessary pain and angst in the future.

Collecting your puppy at the right age

Whilst I realise that not all dogs are acquired as a puppy at the age of 8 weeks, when you do have the opportunity to obtain a puppy, it should be at the 8 week mark, as the pup will be weaned from its mother and this then provides you with an excellent opportunity to provide plenty of positive input up to the age where it is widely recognised that the socialisation period starts from the very outset at 0 weeks and then comes to a close at the age of between 14-16 weeks (the age can vary depending on the source, but for this article I shall refer to 14 weeks). Puppies do of course continue to develop after the age of 14 weeks and you should continue with your efforts after the 14 week period, but this particular window is so important and many first time puppy owners continue to miss this fact and may find that their pup is not as well rounded as it could be in later life. For the purposes of this article, I am not looking beyond 14 weeks and this will be covered in greater depth later on.

In my role as a dog behaviourist, I spend a little time with clients looking at how certain problems (say for example a dog that is not very sociable with other dogs) came to be a problem and it’s not uncommon to find that the puppy was acquired at a later age of let’s say 12 weeks, the owner is told to keep the puppy in until its vaccinations have cleared and so it can easily be another month before the dog is cleared to mix with dogs, at which point the dog is then aged 16 weeks  and this is where the dog’s ability to accept new experiences without being fearful is greatly diminished. You cannot get this time back.

More young adult dogs are euthanased because of behavioural problems than die from the diseases we vaccinate against. (source) This is why I’m close to obsessive about raising awareness of the best age to obtain a puppy (8 weeks) and then to set about a steady and pro-active process of exposing a young pup to all that you can in a progressive and thoughtful way.

So what’s so important about the 14-week mark and why does it matter? On the basis of you obtaining your puppy at 8 weeks of age, you then have a 6-8 week run to offer your puppy all the experiences and more that I have set out in number 2 above. Although I cover the basics such as dogs, people and locations, these particular experiences you offer your dog may vary a little depending on your lifestyle and the activities that you like to partake in as a family. Setting aside enough time in these first few weeks and beyond for your puppy will pay immense dividends, as you work each day on providing stimulating experiences on top of the day-to-day care that a puppy will require.

Although I am generally referring to the period of time that you can have a direct influence upon with your puppy (8-14 weeks and onwards), there is, of course, another huge (50% of it in fact) chunk of the puppy's initial developmental time and that is carried out with the breeder. The breeder can have such a big influence on the first 8 weeks and so it is essential that the puppy is reared in the home (not in a barn at the back of the house away from the comings and goings of a busy household and humans). Being regularly handled and even offering some initial experiences such as car travel, physical handling all over, grooming, bathing and even some initial efforts on toilet training can make your life as the new owner a great deal easier, but more importantly, goes a very long way to creating the balanced, well-adjusted puppy you hope to be living with in later life.

The energy levels and activity rate of some puppies can be really quite tiring, so do be sure to set aside enough time and energy for this critical period in the puppy’s development. I have been to a number of homes with puppies of the let’s say 10 week age mark and it’s clear that a number of problems the owner may be experiencing is due to a lack of ability to let the puppy burn off excess energy due to the vaccination period still being in the process of waiting for the all clear. You will need to discuss this with your own vet and make your own mind up about where you might let your puppy exercise, but you will see in the video how we put Ruby down on the forest floor at various times and locations. I consider these areas to be ‘low risk’ in terms of communicable disease and that the experience of her running freely (she’s on a retractable line at this stage) alongside the other dogs, burning off some natural energy, developing good movement by opening up her skeletal system simply by romping about, sniffing the natural environment, far outweighs the potential risk by putting her down prior to the ‘all clear’ after a vaccination course. I would not put her on the ground in car park areas or any other area that I know to be heavily or moderately frequented by other dogs until her vaccinations have cleared.

Your puppy's health and behaviour combined

I really do think we need to take a fresh look at the advice given to owners at the point of vaccination, as to simply keep a dog indoors until the ‘all clear’ throughout which the socialisation period clock is ticking away never to be regained, can alone account for a large percentage of young dogs that are fearful and/or aggressive in later life. I am of course coming from a standpoint of all things being equal for this puppy scenario I relate to in this article. I have already recognised that not all pups are taken on at the ideal age of 8 weeks and there is then a swathe of permutations that you might experience in that situation which when you delve into other blogs on my site will cover this in more detail. I would love to see a more cohesive approach between vets and behaviour specialist or trainers where a far greater emphasis is being placed on the subject of socialising a young dog and some of the pitfalls to avoid alongside methods on how to set about this process. The process is not at all difficult but does require some application and forethought. I think it’s fair to say that a dog has two fundamental elements in its life; that of health and then behaviour and a vet can address both of these during the first puppy visit.

The joy of owning a puppy

In the video, you will see Ruby meeting with people of all ages and I particularly enjoyed watching the reaction on people’s faces that are either in the OAP category and then the child category say under 10. To see the joy a sweet puppy can bring to these people was a genuine pleasure and I shall miss that phase once she’s older. People will, of course, stick their hand straight in and sometimes be a little clumsy due to their enthusiastic efforts with her, but that’s fine - she needs to cope with all of this and more as she matures. I’m only an arm’s length away should I need to intervene in any way, but we didn’t have any problems as she met other people this way.

One thing to be aware of when using the puppy sling is the chance of other curious dogs attempting to jump up at the puppy, as they can usually smell the puppy once they’ve come into the space and some dogs just might react in a negative way, so watch other dog reactions carefully. I do allow nose to nose meetings if I feel the vibe is right and that the other dog is in my opinion showing all the right signals prior to such a meeting. In fact, this is a good way to start building the numbers when meeting other dogs.