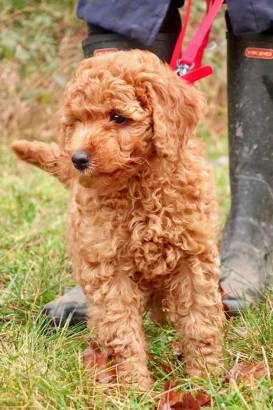 When you have a puppy at the ideal age of 8 weeks, your primary mission when it comes to toilet training is to give your puppy every opportunity it can to toilet in a place that you want it to and for most people that will be in the garden, out of the house.

The key components required to make this happen will be Routine, Vigilance and Reward for getting it right. So let’s look at these one by one:

Our puppy Ruby was being taken out at key times such as after eating, after play and upon waking. On top of that, she was also being taken outside every 30-60 minutes in the waking day so that toilet break opportunities were not being missed. We collected Ruby at the start of the Christmas break, and so she had three adults here to watch and manage her throughout the day and this made a big difference in setting up a nice location for her toilet breaks as well as a routine that thankfully, she quickly grasped and showed willing to follow the routine we had set up. With all our puppies in the past, we have taken them on at the start of a (usually) two-week break when based at home.

Although we usually let our dogs out of the front door into a gravel frontage and there is no passing traffic, we decided to take Ruby out of the back door where she would have the enclosed space of a small rear garden and this has worked well. She will happily do her business on either the paving slabs or increasingly, she prefers the grass as she gets older.

It’s a natural preference for dogs to eliminate away from the home and so when you provide all the opportunities for this to happen, you should have success from the outset. As can be seen in the embedded video on Youtube, we use a short lead on Ruby, so that once out in the garden she his not dragging us about everywhere and that we can repeatedly use the same area and this will further help embed her thinking, re where to go and what she is out there for.

As a part of the routine of exiting the house to do her business, we started to ask Ruby to sit and wait at a number of points when leaving and then entering the home. This is looked at in a separate video and it can be seen in video number 8 - Calm control at doorways. I begin to introduce this from the outset, as it is an easy opportunity to begin a little bit of good manners training (yes, this really can start at 8 weeks!), calmness, expecting to look at and listen to me. Ruby is a bright little dog, granted, and she picked this up quite easily after the first few days, but I would do exactly the same with any dog of any breed and have done with both Pip and Max and they are both very good at doorways, thus introducing safe control at this key area and I’m sure Ruby will be just the same as she matures.

Vigilance when toilet training a puppy

Because young dogs dash about the home so quickly and it can admittedly be tiring to watch them all of the time, you’re going to have a few accidents that much can be certain. These accidents can be made to be few and far between if you are certain you know where she is and what she’s doing at all times.

If you place a strong emphasis on the routine as set out above, then you are unlikely to have too nay accidents in the home. Inevitably, all of these aspects come together over the first few weeks and so it becomes a cohesive approach, rather than just relying on any one particular part for the success to follow.

It’s not an exaggeration to say that we have known at all times where Ruby is and what she’s doing. So as I sit here and type this article to accompany the video I’m upstairs in the office whilst Sara is downstairs watching TV as Ruby sleeps on the rug after a good run about this morning.

To offer some perspective on this subject, we have had (from memory over the two weeks we’ve had her now) about 6 wee’s in the home and 1 poo which was in her crate and I believe she just did it prior to me coming down in the morning. So I can set aside the poo in her crate as virtually a one-off and would be surprised now if she does this again anywhere. The wee’s were interestingly on the front door mat where the older dogs go out and so even then they were our fault for not watching her when she had left the room as we were most likely indulging in a Christmas Sherry or two!

A quick word or two on accidents in the home and how to respond to them. The most I might do if I found her going in the home would be a verbal ‘Ah-Ah!’ and then swiftly pick her and take her outside straight away. There would never be any physical punishment such as smacking, or the use of a rolled-up newspaper (this does still happen, but not here you’ll be pleased to know). Also, the rubbing of a pup’s nose into its own toilet is not going to help things in the slightest, as well as erode your dogs trust in you, which is the opposite than what you should be trying to do at this delicate time. Just clean it up using an approved cleaning product and improve on the routine and vigilance next time.

The biggest section of the 24 hour period that she is left alone is at night and at this time she is in her crate where we know she is safe and secure.

Prior to going to sleep, we lift her water away about an hour before bedtime so that she is reasonably well-drained down and is of course given toilet breaks out of the home before bedtime when she is placed inside her crate and she is left until we return in the morning.

We don't use puppy toilet training pads, although I realise that some do. I have seen on many puppy visits to people’s homes that the puppy has become accustomed to urinating in the home and that this is a habit that has to be broken later on in the puppy’s life and training cycle. We check the metal base under Ruby’s bedding each morning and we have only found a wet patch on two occasions and only a poo on one morning, which I think she had recently done and thankfully was easy to pick up and then wash the bedding.

Reward what you do want with puppy toilet training

When you bring together the two elements already mentioned above, being Routine and Vigilance, that in some respects is virtually it. Everything else falls into place over the coming weeks and months. Puppies respond well to being rewarded for things that we approve of and so Ruby is no exception. We have all made a great effort to verbally reward her at the time of her relieving herself in the garden and interestingly, despite us offering her small treats in the garden after she had gone, she would not accept them. I would usually recommend this approach for most owners and so we shall try this again soon, with maybe a small soft treat that she would look for.

In any event, Ruby has been very content to do her business and then accept our bright and positive verbal rewards, which once she’s finished we add in a nice little body rub afterwards. At this point in time, She is coming along very nicely and is not looking for food rewards so far for anything, which I didn’t expect. I think this is a testament to the 75% poodle in her and her inclination to work just as happily for verbal and physical touch rewards as she is food. Some dogs work well like this, but Ruby is the first dog I’ve owned that is showing clear signs of having that preference, which is fine by me.

Putting my experiences with Ruby to one side for a moment, the key message here is to ensure that you identify what it is that your puppy sees as a reward and to use that. I normally find that it’s either food, toys or praise in that order. All are as good as each other, though it depends on your dog.