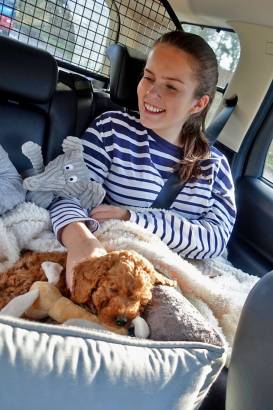 On the second video of the Puppy Training Journey, I look at the process of collecting the puppy and bring her home, meeting the dogs for the first time and introducing Ruby to her new home and making that as safe and stress-free as possible.

As you might imagine, we put a great deal of effort into finding the right breeder and litter that is trustworthy, reputable and we were able to see other litters from the same parents, so everything was nicely lined up prior to the first trip to the Canterbury area before we were able to choose our particular puppy. I am pleased that we effectively had the pick of the litter (we had to choose two as in first and then second choice pups, as another lady was already promised the true pick of the litter…thankfully the other buyer wanted what was our second choice, so it was a win-win situation). We first saw the litter at 4 weeks unwire able to make our choice then. It was not easy, but out of the 4 and at that age I felt that little Ruby was the dog that appeared to be in the middle in terms of energy and character. There was another dog that was quite noisy and bossy and then, on the other hand, another dog that was quite quiet and less pushy in comparison. Ruby just seemed to fit into that sweet spot, though it has to be said, that there was not what I would consider a ‘bad dog’ in the litter. They were all gorgeous.

When we returned on the collection day, the puppies seem to have evened out a little and it would have been harder to choose on that day. Nonetheless, Ruby was still my preference and thankfully so! The breeder had done a lovely job in rearing the puppies in the home. The pups were kept in the home and were a part of the comings and goings in the household and were also exposed to family living there and all that it entails…which is a very good thing. Puppies that have been reared in outdoor kennels or sheds are not usually as well balanced as those that are reared in a normal home environment. Secluded puppies can often appear nervy, fearful, reluctant to engage and so on.

The importance of puppy socialisation

The ideal age for collection is once they are weaned at 8 weeks and then you have a good opportunity to expose them to all the things that you would anticipate in your day to life under the heading of ‘puppy socialisation’ which is so important for all young dogs. A well-socialised dog is set to be well balanced and confident with dogs, people and all locations that you might reasonably expect. The socialisation period ends at about 14 weeks and so this time between 8 and 14 weeks remains a critical period for you the new owner to provide positive experiences during that time and of course into the future.

Puppy socialisation will be a constant drum that I bang through this ‘Puppy Training Journey’ series, as the most common reason I see adult dogs in my work as a dog behaviourist and dog expert witness is for a lack of controlled exposure to the things I mention: dogs, people and environment or experiences. When a behaviour condition is so easily avoidable, it is always disturbing and upsetting to see a dog struggling so much in adult life, hence the emphasis upon avoidance here.

The puppy hand over

During the video, you can see us go through her vaccination and microchip papers and carry out a hand over in terms of her current feeding routine. We also discuss her worming to date. We already have a quantity of the dried food she was being fed so as to create a stepping stone over to Forthglade puppy which she has nearly moved onto after 2 weeks of being home with us.

It’s really quite sweet when she is physically handed over and to see the faces on the girls as they hold and coo over her is a lovely thing. We were mindful of the four-hour trip home and so we did not stay too long and tried to remain on the mission of getting back home at a reasonable hour.

The remaining three puppies were in the pen and there was a brief ‘goodbye’ before we left. On the way home, Ruby slept all of the way and truly amazed us all as she didn’t complain once. She was given the opportunity to pee at Oxford services but refused the chance. She was placed in the puppy pouch and was walked into Waitrose to help choose a lunch dish each.

Once we were home, she was put down on the ground where we live and she finally managed to pee - much to everyone’s delight.

Max and then Pip were brought out of the home to meet little Ruby and all dogs were kept on the lead for this. The video shows how we held Ruby and allowed Max and Pip to approach to sniff her whilst preventing any jumping from Ruby the puppy. I think you’ll agree that Ruby has a natural confidence about her and appears to take it all so well.

Once we were happy that the initial nose to nose meetings went okay, we allowed the dogs to be loose and more natural. We all sang her praises when Ruby pee’d on the gravel…quite hilarious looking back. I give a commentary on this as the video plays.

Bringing the dogs into the house which is a smaller space meant that we kept Ruby on her lead as the other dogs moved about and sniffed. There is no magical recipe here, as we are relying largely on the already nice nature of Max and Pip and having a degree of confidence that allows these meetings to occur a little more naturally as the first hour or two progressed.

Ruby responded well to a couple of initial vocal corrections (just an ‘Ah-Ah!’) as she made her first attempts at grabbing the lower branches of the Christmas tree and so on. Two weeks on from this first meeting and Ruby is more exuberant and confident than ever before, so she does at times push her luck. Although we can sit back to a degree and allow them to sort themselves out, we are overseeing ALL time together so that Ruby is not allowed to be too much of a pain. An energetic puppy is quite capable of effectively terrorising an older dog and it’s not appropriate to sit back and expect the older existing dog/s to correct the puppy. Some dogs will do this, but others won’t - much to the confusion of the new owner. Supervision at all times is essential.

First puppy meals and into her crate

You can see how she demolishes her first meal and then when given the opportunity, does a nice little poo in the garden! Looking back over the first two full weeks with Ruby, she has from memory only once poo’d in her crate and maybe we’ve had 10 pees in the house in total. Our floors are all hard downstairs, and so the pee’s were easily cleaned up. All three of us have been home and have shared the toilet duty between us which is an excellent way to fast-track her progress in this respect.

You will also see how when we put her meal in the crate, that she is briefly held in the Sit position and she is told to Wait and then released once she is looking calm and controlled. We’re only looking for brief moment s here, nothing that would constitute obedience. Start as you mean to go on and all will be well.